The best part about not having a plan is that sometimes things end up better than you could ever imagine!
I stumbled upon a hostel last night that very well could have just been a nice old lady letting me stay in her house. I had arrived in Puerto Montt around noon and didn't have a plan for where I was going to stay that night. Just a few blocks from the bus station I saw a really cute sign: Hostal Suiza 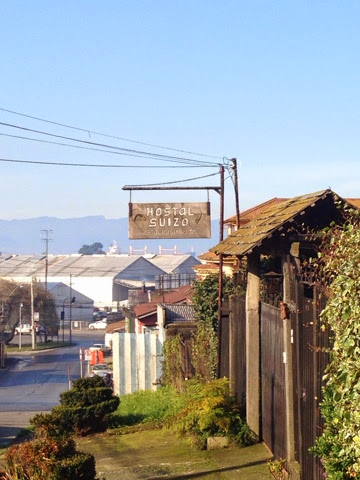 Only problem was I couldn't figure out how to get in. I stood looking through the gate for a few minutes hoping someone would see me when I noticed a tiny sign - "backpackers go to next door - 247". So I walked up the street further and rang the bell of the next house. An old woman opened one of the windows on the first floor and stuck her head out. Her face lit up when she saw me standing there with my backpack. She came running to the door and before I knew it I had an adorable twin bed with a great view, a key to her house, we were all sharing a bathroom, and I had been introduced to three other nice old ladies in her kitchen. I say before I knew it because she didn't speak a word of English just some damn fast Spanish. I just smiled and nodded as usual.
Later that night she came by my room with her alarm clock asking what time I wanted to be woken up and when I wanted breakfast. It was like being at grandma's house!
I had breakfast in her kitchen next to the wood burning stove with a fresh loaf of bread she had just baked. She sat and chatted with me the whole time.
Sometimes you think you're far away from home, but just because it's not your home doesn't mean it can't be home.
Posted by Unknown at 5:46 AM